This page has photos of some of the birds that passed through Douglas Park during fall migration (and a few that liked what they found here and wound up staying for the winter).

The warblers that pass through Douglas Park in fall continue south, sometimes all the way to Central or South America. 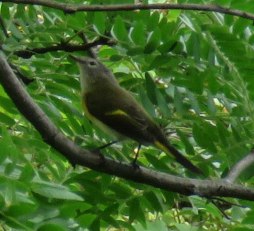 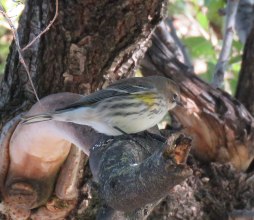 Thrushes move south from forests in Wisconsin and Canada, stopping by Douglas Park to fuel up on bugs and fruit. 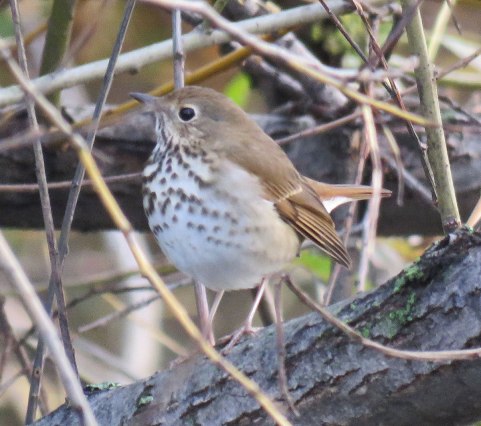 American Robins are a type of thrush. Their numbers peak in mid fall, when crab apples are ripe. As long as there is fruit to eat, robins can survive the cold. A few even stay all winter.

Some woodpeckers migrate, too, joining the resident Downy Woodpeckers for at least a few weeks (and sometimes for the full winter)..

This year at least one Red-bellied Woodpecker stayed at Douglas Park into February. (October, 2016)

This young male Red-winged Blackbird was hatched and raised in a marshy area farther to the north. (November, 2016) 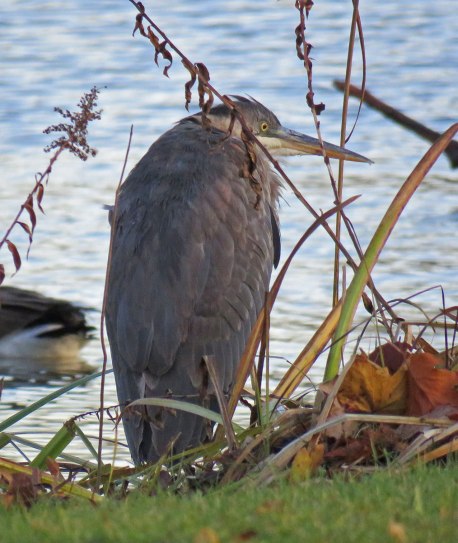 The streaky bird in the back is a young Black-crowned-Night-Heron. It was photobombed by at Double-crested Cormorant drying its wings. A female Wood Duck is peeking out above the cormorant’s right wing. (September, 2016)

Hundreds of Canada Geese fly south to Douglas Park each fall. Many spend the winter if the snow is not too deep. If you search the goose flocks carefully, you might find some specially marked Canada Geese or some different species of geese in the mix. 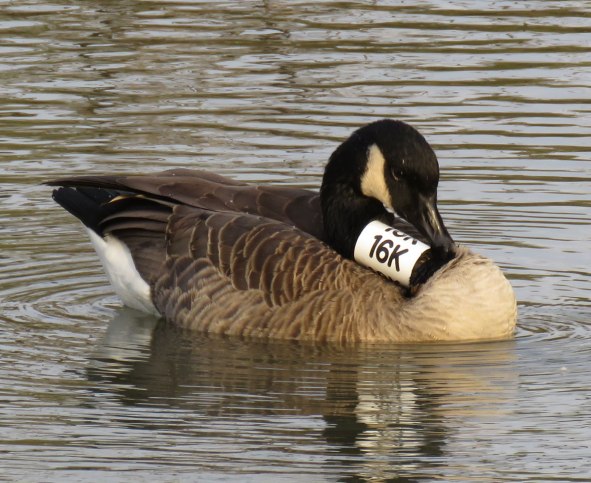 Canada Geese with white neck collars are part of a Chicago-area study of wintering geese. (October, 2016)

Canada Geese with white leg markers were banded in Thunder Bay, Ontario, Canada. Many of them, like C120, return to Douglas Park year after year. (November, 2016)

This young dark-morph Snow Goose arrived at Douglas Park during October, 2016, and stayed until snow fell in early December. (October, 2016)

This is the first Greater White-fronted Goose recorded in Douglas Park. (November, 2016) 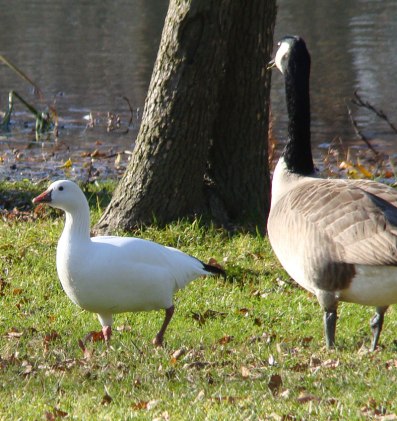 Small, white Ross’s Geese are uncommon in Chicago. When this one visited Douglas Park during November, 2013, many bird watchers came to see it. (November, 2013).

Raptors include falcons and hawks. The three types of raptors shown below can be found at Douglas Park all year. but they are much easier to see once leaves fall off the trees. 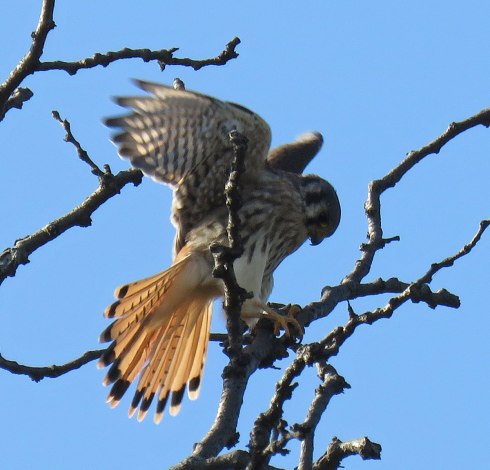 American Goldfinches can also be found in Douglas Park year round. Large flocks visit the sanctuary each fall to eat seeds from dried wildflowers. 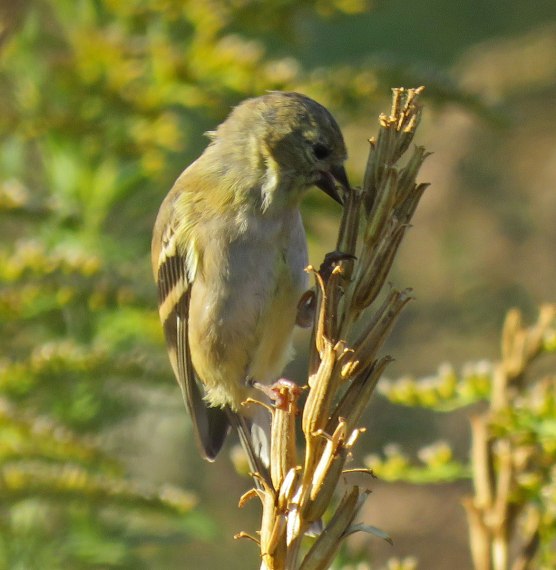 Many types of sparrows stop by Douglas Park during fall migration. You can sometimes see more than a hundred individuals on the golf course foraging for seeds.

White-throated Sparrow foraging on a path near the Lily Pond. (November, 2016) 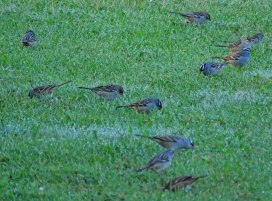 Flock of mostly White-crowned Sparrows searching for seeds on the golf course. (October, 2016).

Song Sparrow foraging on the lawn north of the lagoon. (October, 2016)

Swamp Sparrow in the reeds around the sanctuary lagoon (November, 2016) 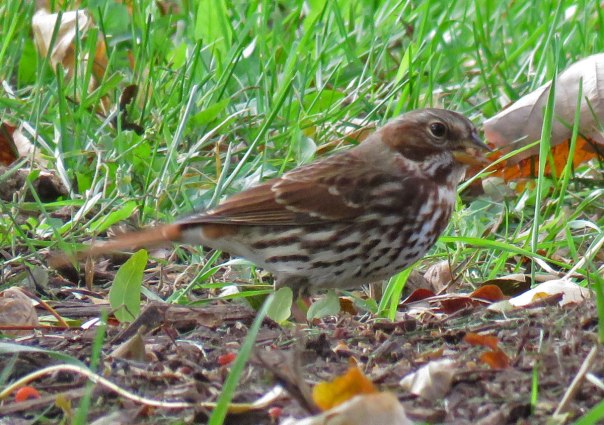 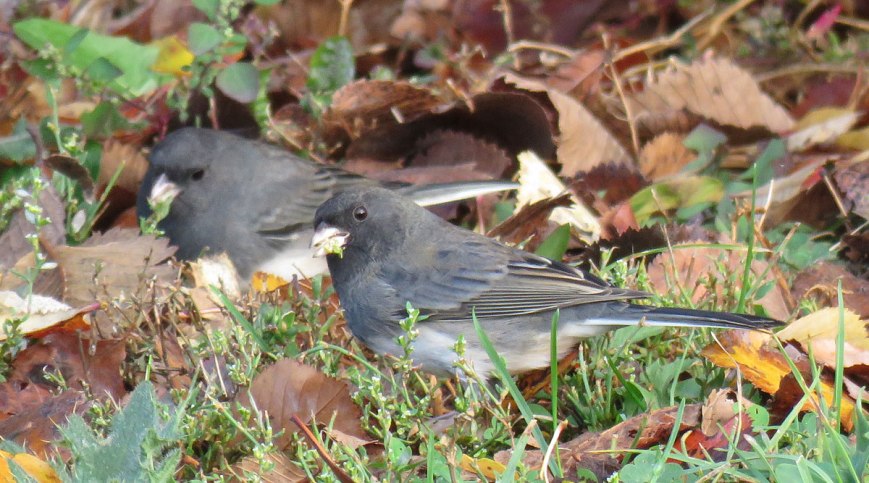 Dark-eyed Juncos foraging on the lawn north of the lagoon. (November, 2016)

Dozens of Dark-eyed Juncos arrive at Douglas Park each fall. Many juncos stay all winter, along with 20 other kinds of birds. To learn more, go to