This page has photos of some of the many insects I have found in Douglass Park during 2017 and beyond. The photos are arranged more-or-less by season, from late spring and early summer at the top of the page to late fall and winter at the bottom.

First, here are some butterflies found in the Douglass Park during spring and summer.

Painted Lady butterflies are found in Douglass Park starting in early spring. (May, 2016) 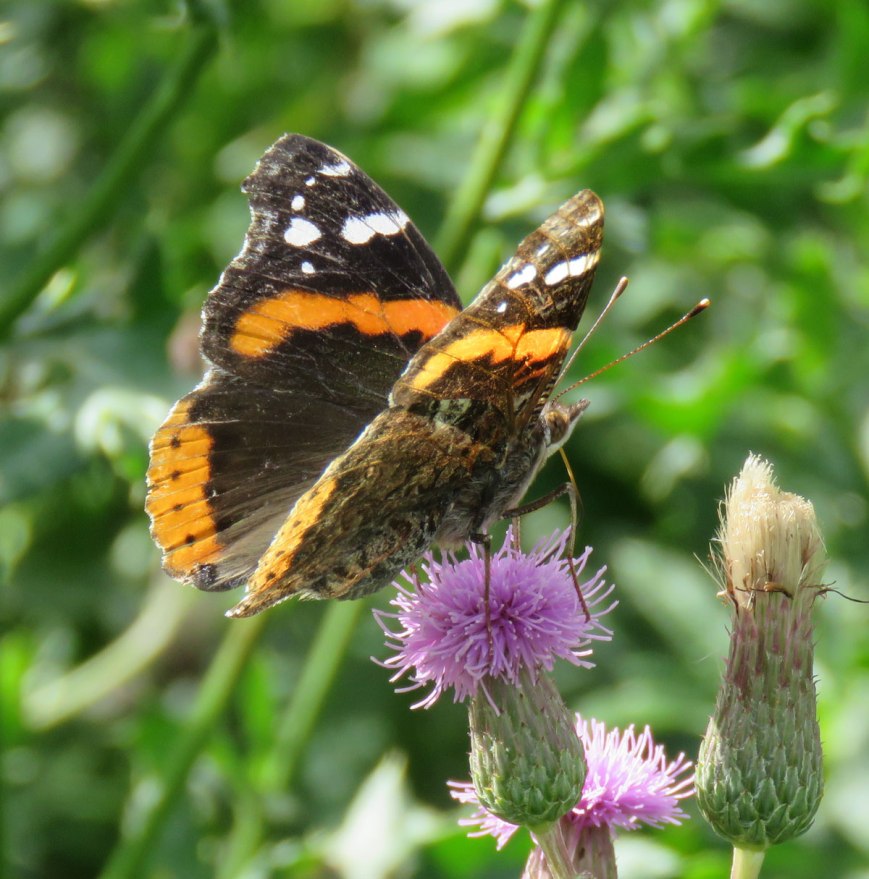 Red Admiral butterflies sip nectar from thistle and other flowers in the Douglass Park sanctuary. (July, 2016)

Cabbage White butterflies are probably the most common butterfly in the park. (July, 2016)

Black Swallowtail butterflies are not as common in the park, so they are always a special find. (July, 2016)

Here’s the only Giant Swallowtail I’ve seen in Douglass Park, found on August 15, 2017 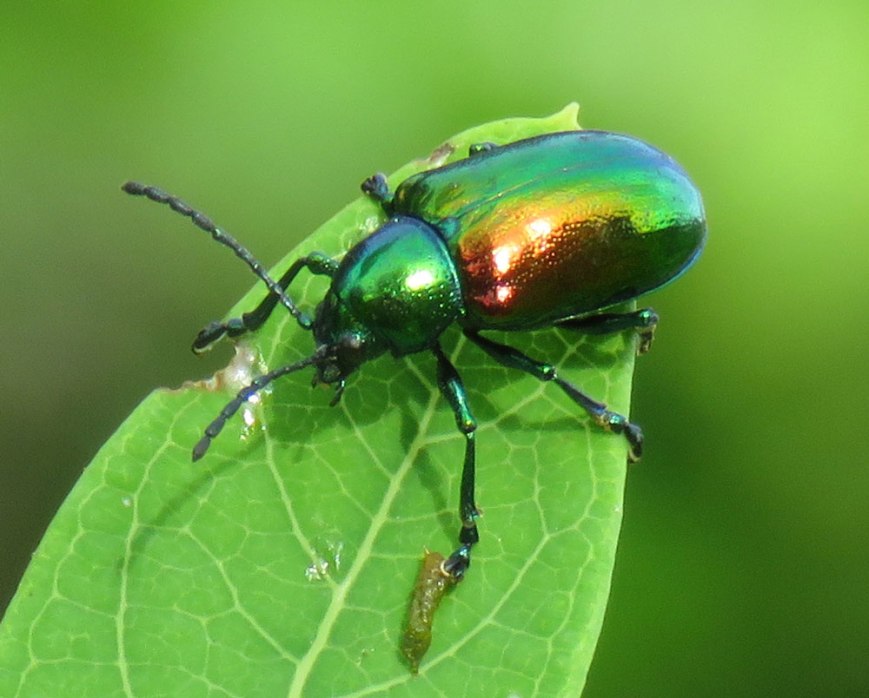 Dogbane Leaf Beetles are metallic jewels that look more appropriate for a tropical rainforest than an urban park.

In early July we found dozens of Dogbane Leaf Beetles feeding on dogbane in meadow and prairie patches in the Douglass Park sanctuary. 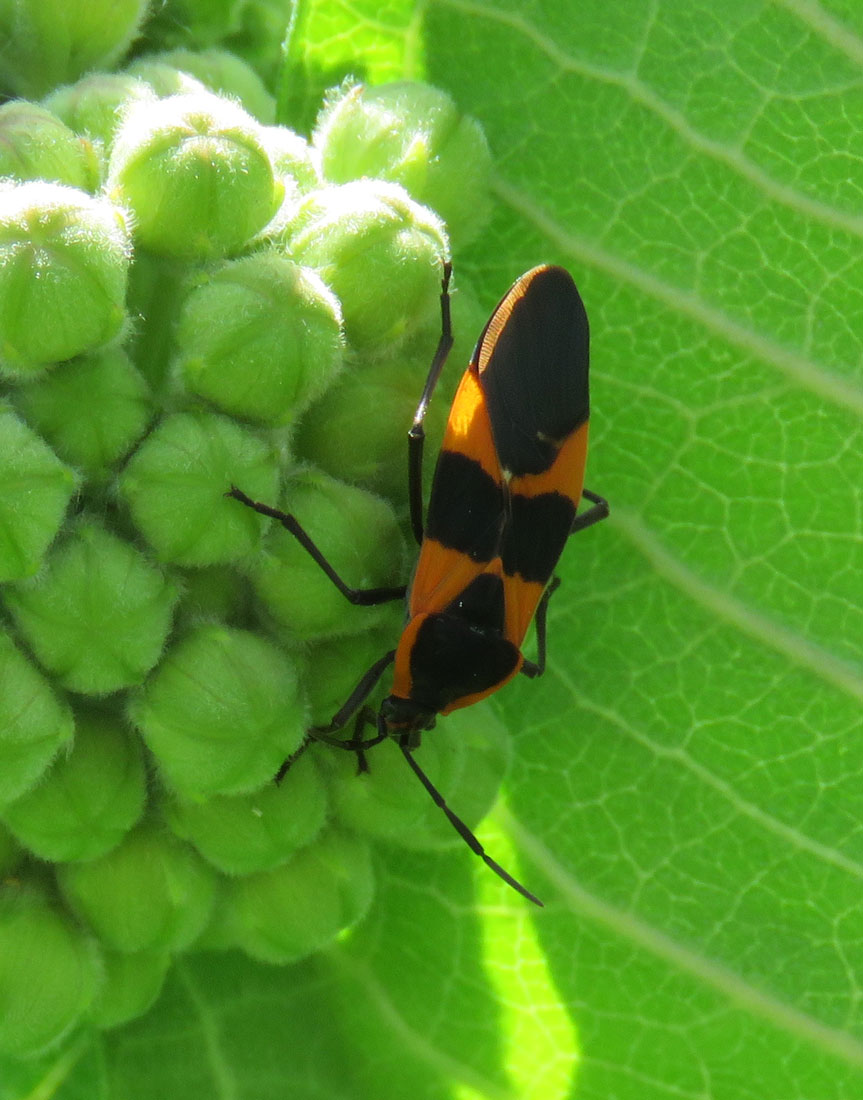 The red-and-black pattern of Red Milkweed Beetles also warns potential predators of their bad taste. Some people call these longhorn beetles Singing Milkweed Beetles, because they squeak when you pick them up. 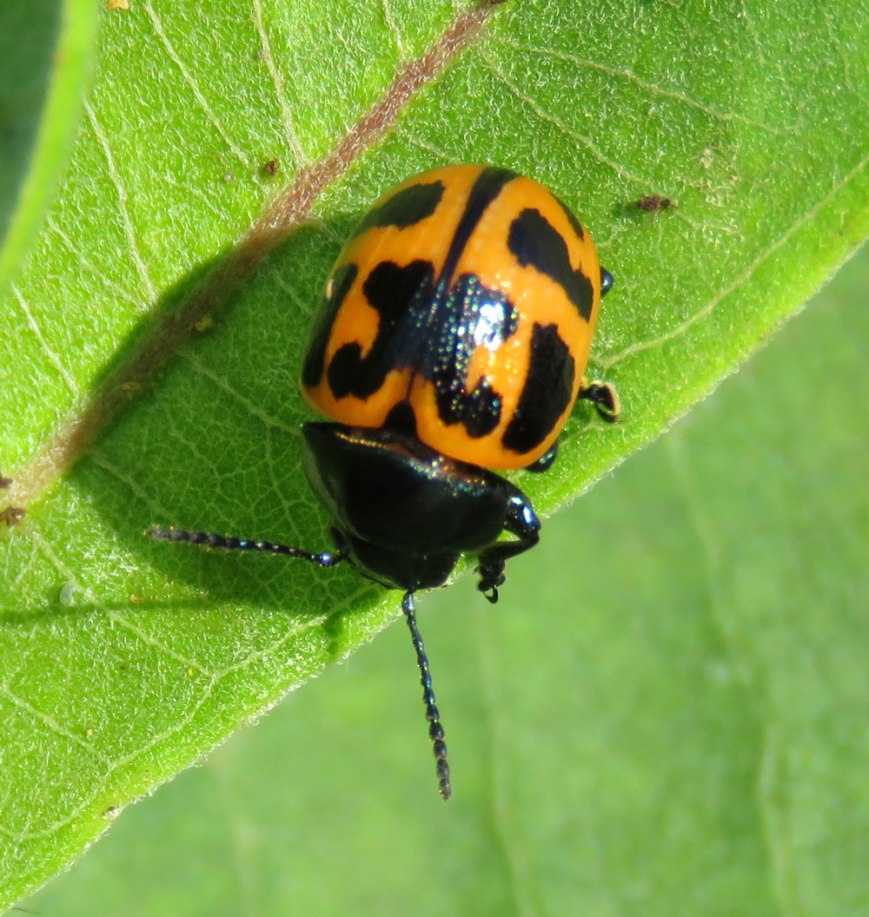 The last of our nasty tasting insects is this Milkweed Leaf Beetle, with another variation of the bold orange-and-black warning pattern. (August, 2016)

The Douglass Park lagoons and the Lily Pond (south of Ogden) attract lots of dragonflies, plus some of their smaller cousins.

Like all dragonflies, this Common Whitetail catches and eats small insects while flying over the park. (July, 2016)

Bright blue male Eastern Pondhawk dragonflies are common at the edges of the Lily Pond during summer. (July, 2016) 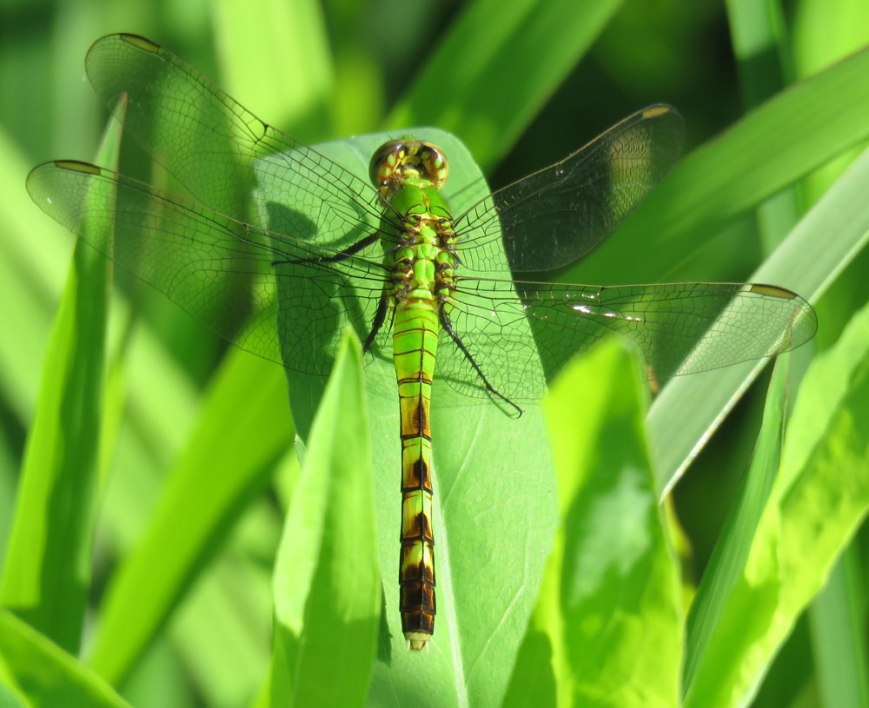 You might expect this bright green dragonfly to be a different species from the one above, but it’s really a female Eastern Pondhawk. In summer you can watch the male pondhawks court the females. Then the females lay their eggs in the Lily Pond’s shallow water. 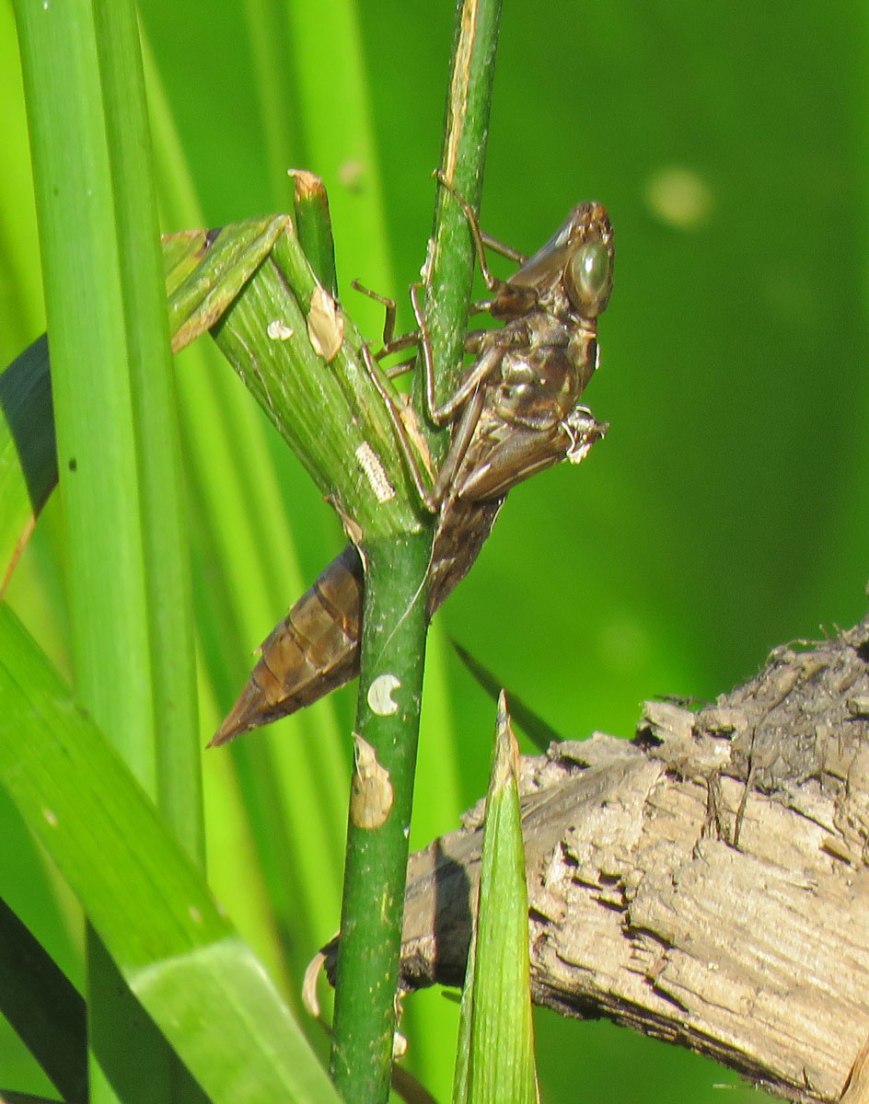 Young dragonflies grow up underwater, eating small insects and underwater worms. When they are fully grown, dragonfly nymphs crawl up a stem and out of the water. The skin on their backs splits, and the adult dragonflies emerge, inflate and dry their wings, and then take off into the sky. During summer you can find the empty skins of dragonfly nymphs at the edges of the Lily Pond and lagoons. 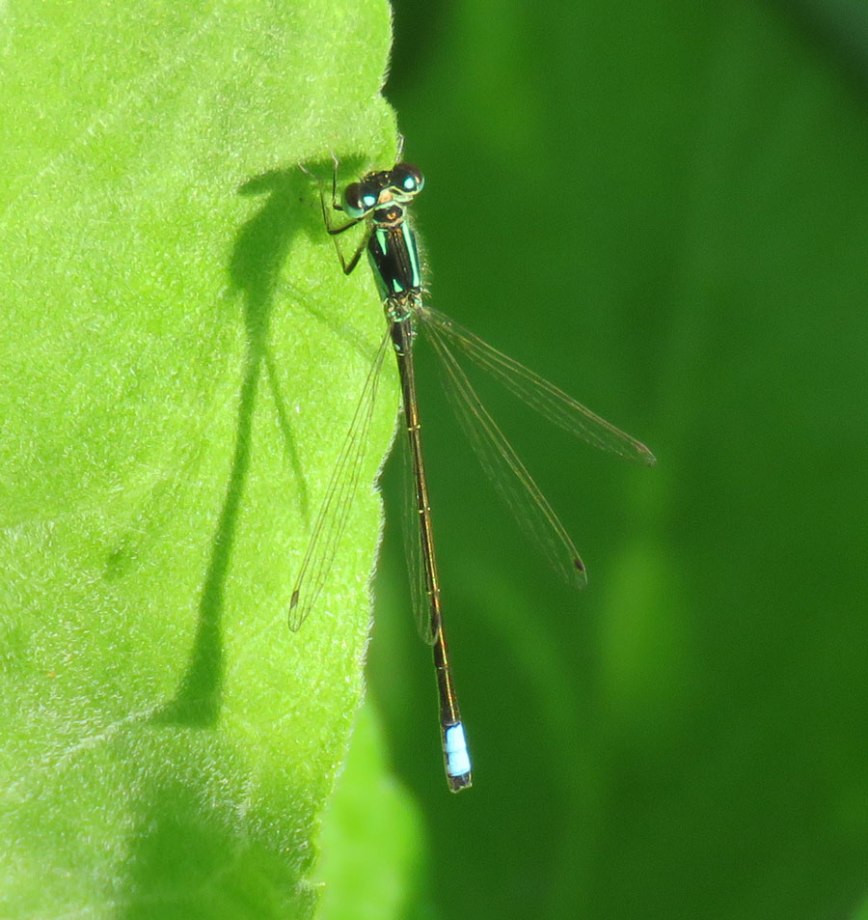 Damselflies, like this male Eastern Forktail,  are small and slender cousins of dragonflies. You can see them on sunny summer days if you look carefully on plants at the edges of the sanctuary lagoon.

Now it’s time for a slightly scary story about a very large wasp that only hurts cicadas, not people. Last summer we found inch-long Cicada Killer Wasps, like the one below, on the Douglass Park putting course starting in late July. Although they look scary, Cicada Killers aren’t interested in stinging people (unless, perhaps, you step on one with bare feet)

Cicada Killer Wasp on a brick on the Douglass Park mini-golf course.

Cicada Killers dig deep burrows in the sandy soil of the mini-golf course…. 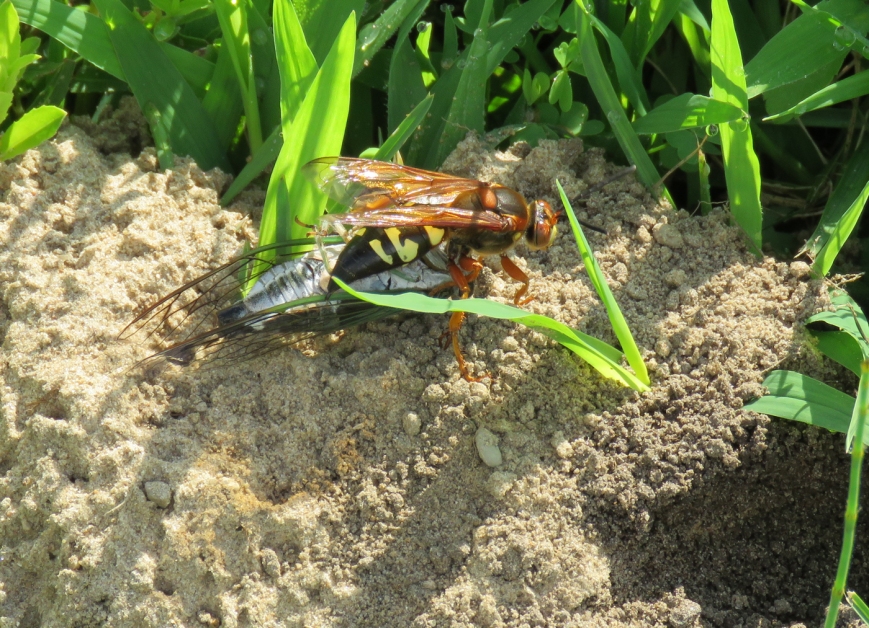 …and then Cicada Killers fly around the park in search of Annual Cicadas, which are singing in the trees that time of year. The wasps give the cicadas a special sting that keeps keeps them alive but paralyzed. Then the wasps grab hold of the cicadas and fly back their burrows. The cicadas are dragged deep underground, where they will be food for growing Cicada Killer Wasp larvae.

When goldenrod flowers start blooming in late summer, they attract lots of bees and wasps to sip nectar and collect pollen. Don’t touch those bees and wasps, because they will sting to protect themselves. The bold yellow-and-black patterning common to bees and wasps reminds birds and other predators to stay away or be stung!

But if you look even closer at goldenrod flowers, you’ll find boldly patterned insects that don’t have stingers. These yellow-and-black copycats may avoid being eaten by looking dangerous when they are really harmless. 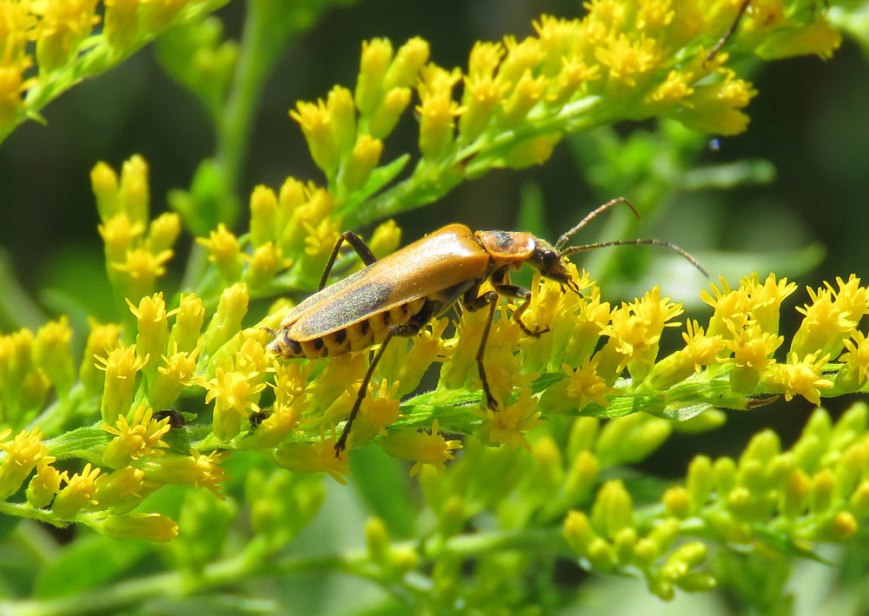 The bold yellow-and-black pattern of this Soldier Beetle might make a predator think twice about trying to eat it. (August, 2016)

This Locust Borer longhorn beetle is also boldly patterned. It’s pattern is not an exact imitation of a bee or wasp’s appearance, but it may be enough to protect the Locust Borer from potential predators. (September, 2016) 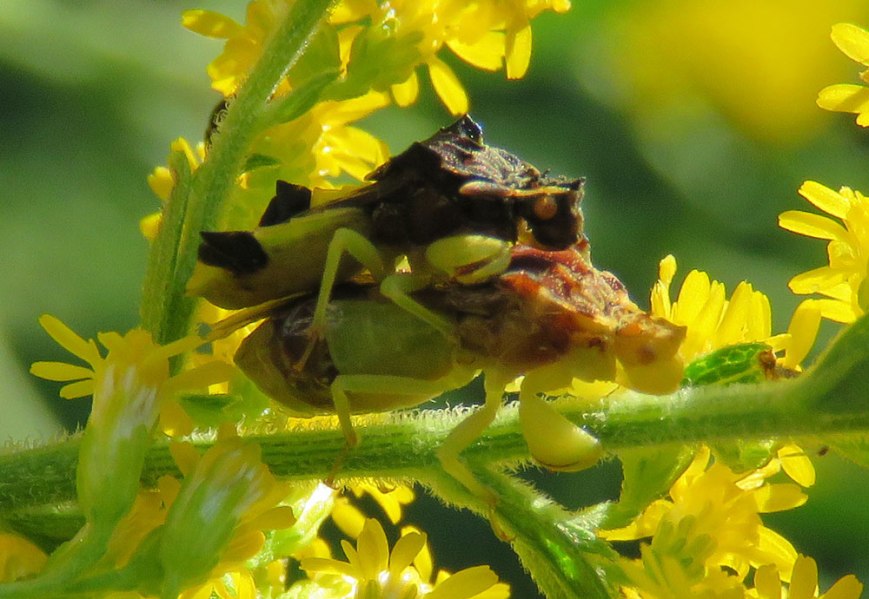 Ambush Bugs look more like pieces of flowers gone to seed. They sit still and wait on goldenrod and other flowers, then catch and eat smaller insects that get too close. (These two ambush bugs are mating). (August, 2016)

Late summer and fall are great seasons to look for insects in Douglass Park. There are still butterflies, moths and dragonflies to be found, plus grasshoppers and their predators are really coming into their own.

Sulfur Butterflies and other insects seek shelter on colder fall days, then emerge and fly around when the sun warms their surroundings. (November, 2016)

By fall most grasshoppers have wings. As you walk through the more natural parts of Douglass Park, grasshoppers leap into the air and fly off, looking a bit like temporary butterflies. (September, 2016)

If a flying grasshopper lands too close to a Chinese Mantis, neither its wings nor its powerful back legs can save it. (September, 2016)

Late summer and early fall is migration season for many kinds of dragonflies, including the Wandering Glider, pictured below. Living up to their names, Wandering Gliders are found on every continent but Antarctica. Individuals may fly (or glide) as far as 3,700 miles during migration, even farther than Monarch butterflies travel.
http://www.newsweek.com/small-dragonfly-may-make-worlds-longest-flights-432655 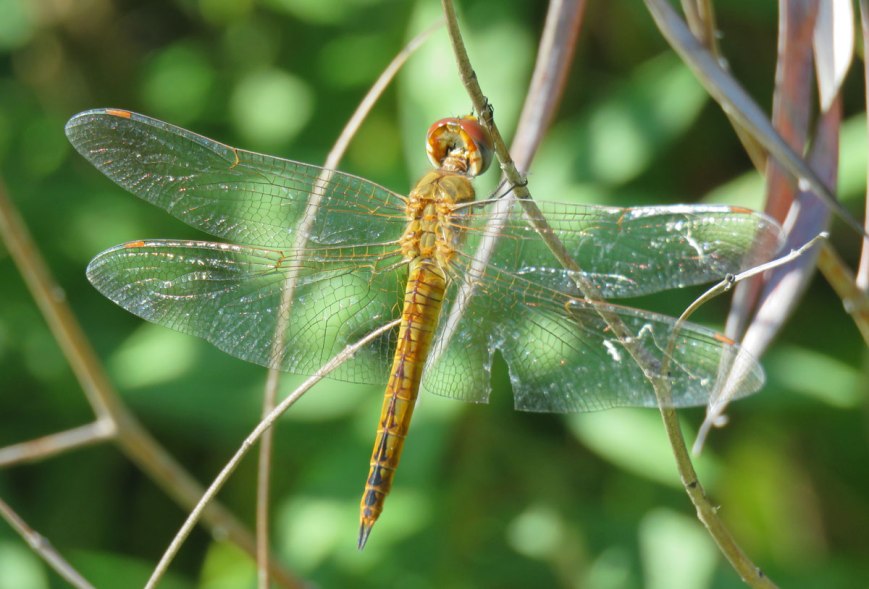 Wandering Glider at the edge of one of the sanctuary’s prairie patches. (August, 2016)

Green Darners are another common migratory dragonfly. It was cool on the late August morning when I took the photo below, and this individual was not yet fully active. 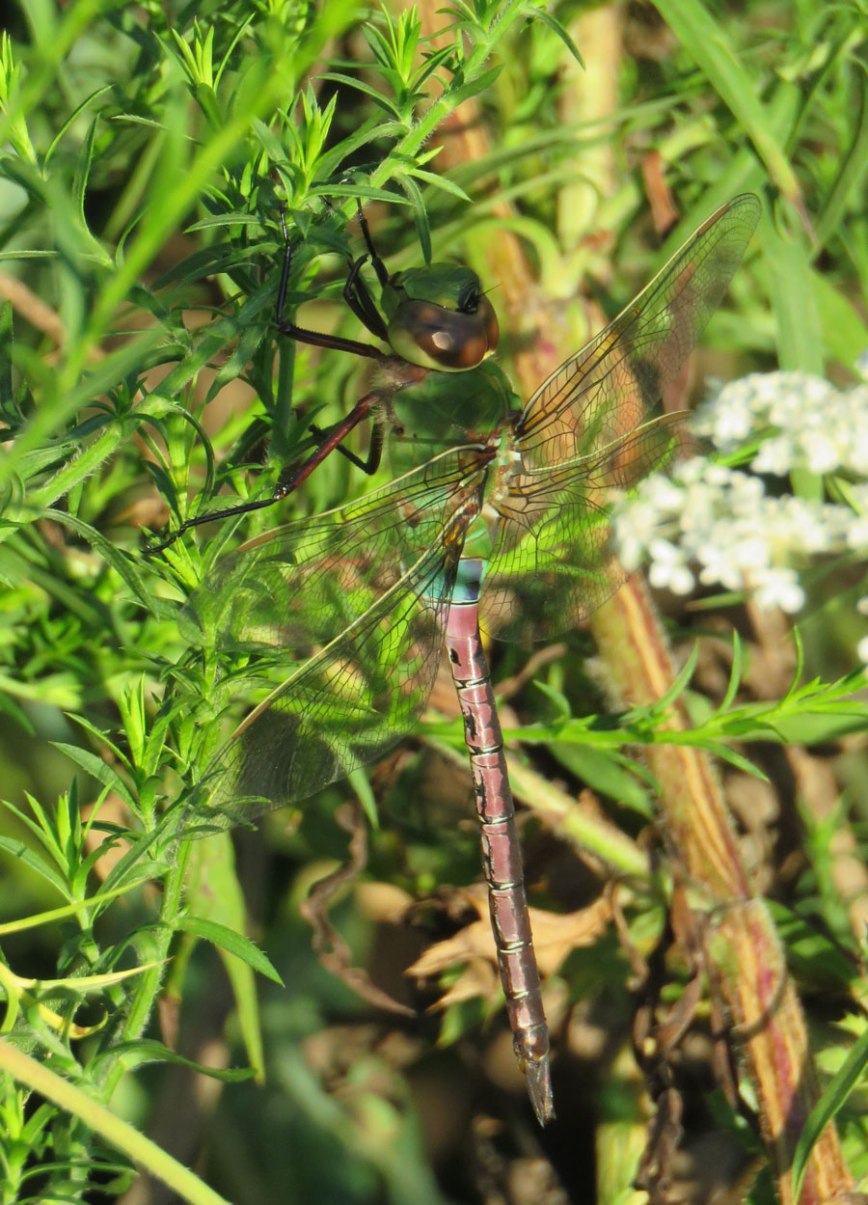 Green Darner dragonfly at the edge of the sanctuary meadow. (August, 2016)

New England Asters were still brightening the sanctuary meadows during early October, providing nectar to the last few butterflies of fall. This male Monarch was fueling up for his long journey south.

The Red Admiral butterfly, below, also was sipping nectar in the sanctuary during early October, although migration was not its destiny. Red Admirals around Chicago hibernate in winter, although they may not survive very cold temperatures.

Insects can be hard to find during late October as the weather cools and most plants die back for winter. However, it’s probably the best time of year to find young Large Milkweed Bugs, which grow by sucking on milkweed seeds. https://en.wikipedia.org/wiki/Large_milkweed_bug

Large Milkweed Bugs on the seeds of Common Milkweed (October, 2016)

Even when it’s too cold for insects to survive, you can still find the things they left behind in Douglass Park. 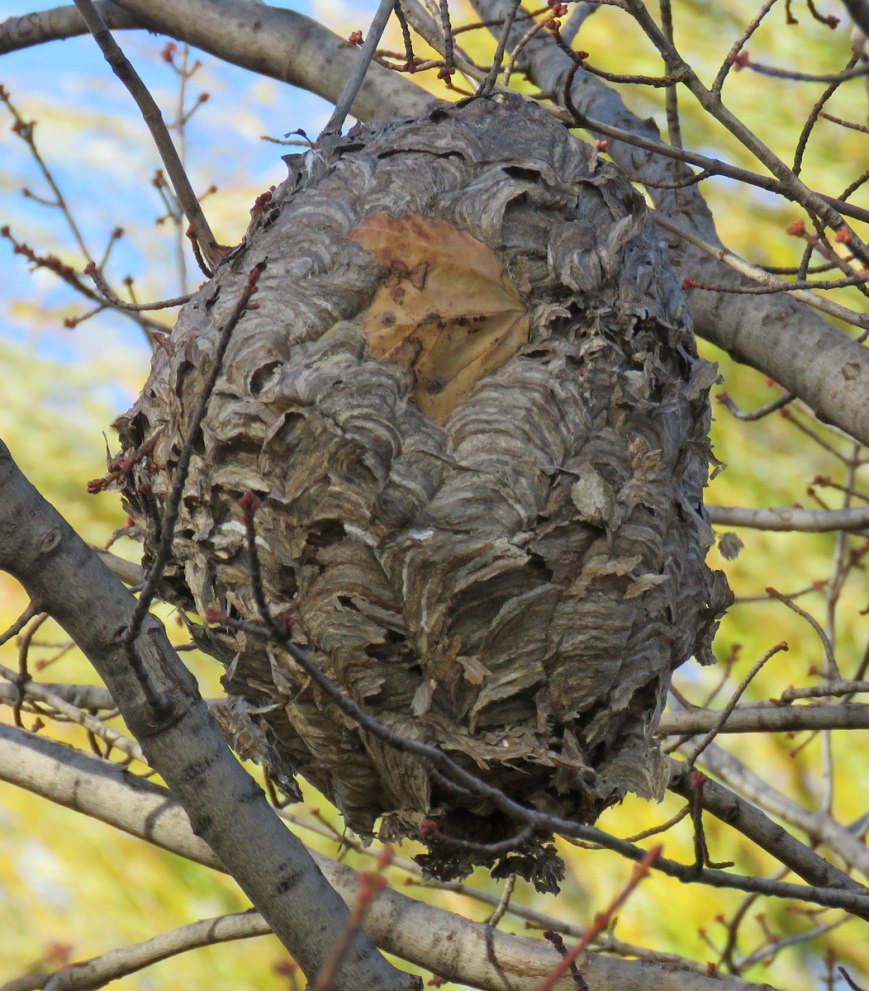 Chinese Mantis egg cases are laid on stalks and stems. The eggs survive winter’s cold, and then baby mantids hatch in late spring and early summer. (To learn more about those little brown balls among the fallen stems, go to the Mammals page and look under Cottontail Rabbit.)

This sculpture, once front of the Douglas Park Cultural Center, is entitled “Ancient Protocol.” The artist is Paul Russell, The Chicago Blacksmith.

The artist is Paul Russell, The Chicago Blacksmith, operator of Lawndale Forge.