Here are three ways we can find out what mammals live in Douglas Park:

For instance, opossums are sometimes out during the day, but are more active at night. When they walk through snow or mud, opossums leave tracks and trails behind. So here are three ways we’ve recorded opossums in Douglas Park (clockwise from the upper left): A photo taken on a cold December morning; the trail left by that opossum as it waddled towards the cover of lagoon-side reeds; and a photo taken by the Lincoln Park Zoo’s wildlife camera in Douglas Park on a February night. 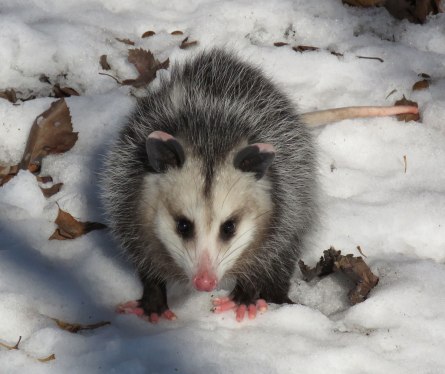 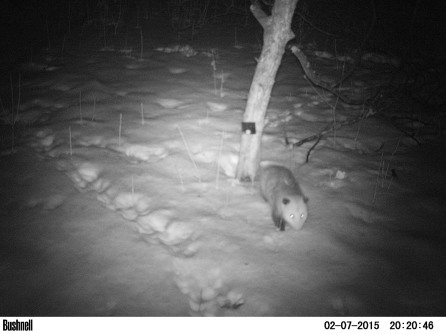 There are more photos of Douglas Park mammals lower on this page. But first, one more thing about opossums. Even thought their tails are naked and look like rat tails, opossums are marsupials, not rodents. That means opossums are more closely related to kangaroos and koala bears than to rats and mice. 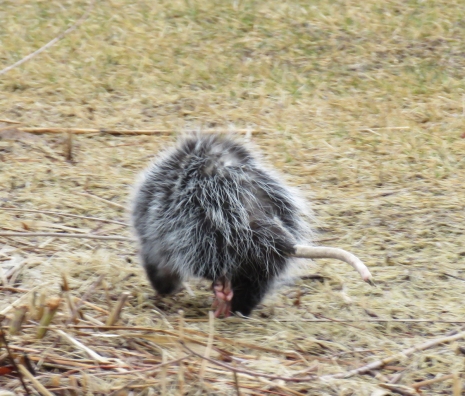 So, when you see this end of an opossum, be reminded of koala bears, not rats!

Thanks to the Lincoln Park Zoo Urban Wildlife Institute for letting us use some of their wildlife camera photos! Here’s what their motion-sensitive wildlife cameras look like: 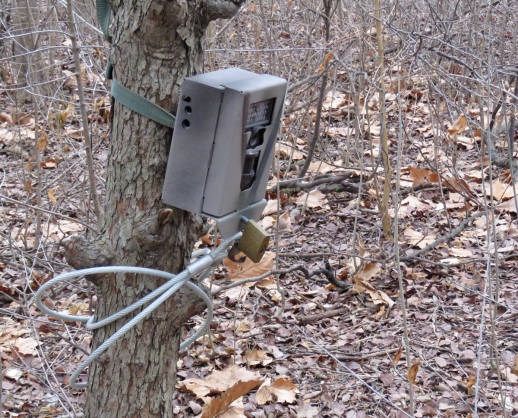 Wildlife-monitoring camera placed in Douglas Park by Lincoln Park Zoo’s Urban Wildlife Institute. These cameras rotate through Chicago-area parks and other natural (and unnatural) areas. If you ever find a wildlife camera, be sure to wave but then leave the camera alone.

Go here to learn more about monitoring urban wildlife in the Chicago area. You can also check out this DNAinfo article. 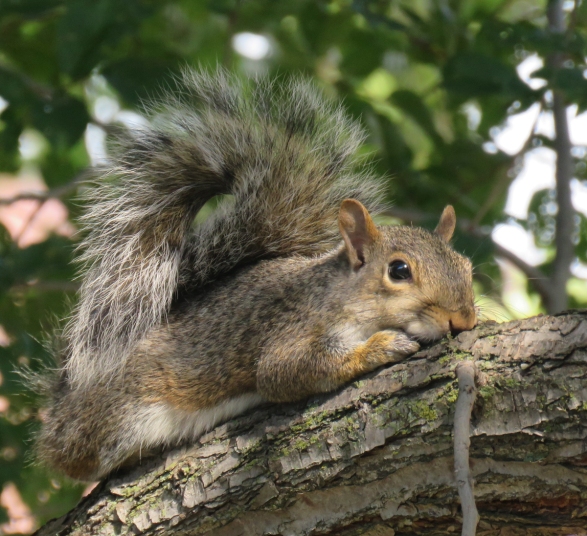 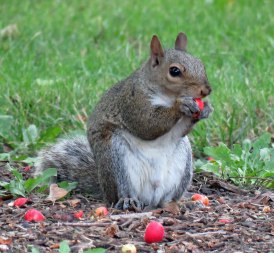 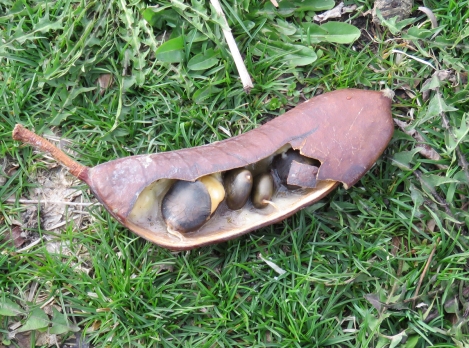 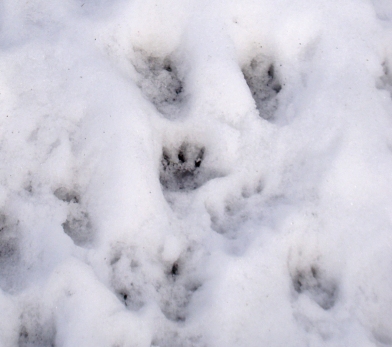 There are also Fox Squirrels in Douglas Park, but they are much less common than Gray Squirrels. Fox Squirrels have a much more orangish cast to their fur, and their bellies are always orange. 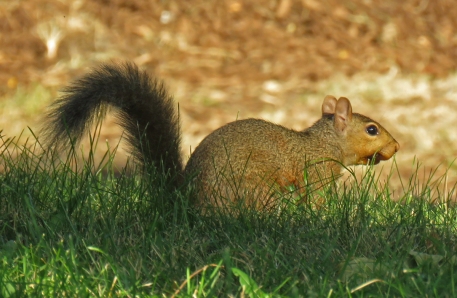 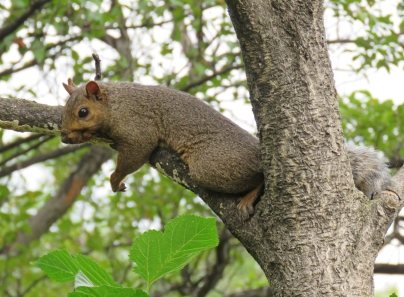 Cottontail Rabbits are also common in the park, especially in the sanctuary. You usually see their white tails as they hop away from you, but sometimes Cottontails pose on the golf course turf. You can also look for Cottontail signs, like their distinctive tracks left as they hop across the snow, small trees they have chewed on for winter food, and their brown pea-sized droppings. 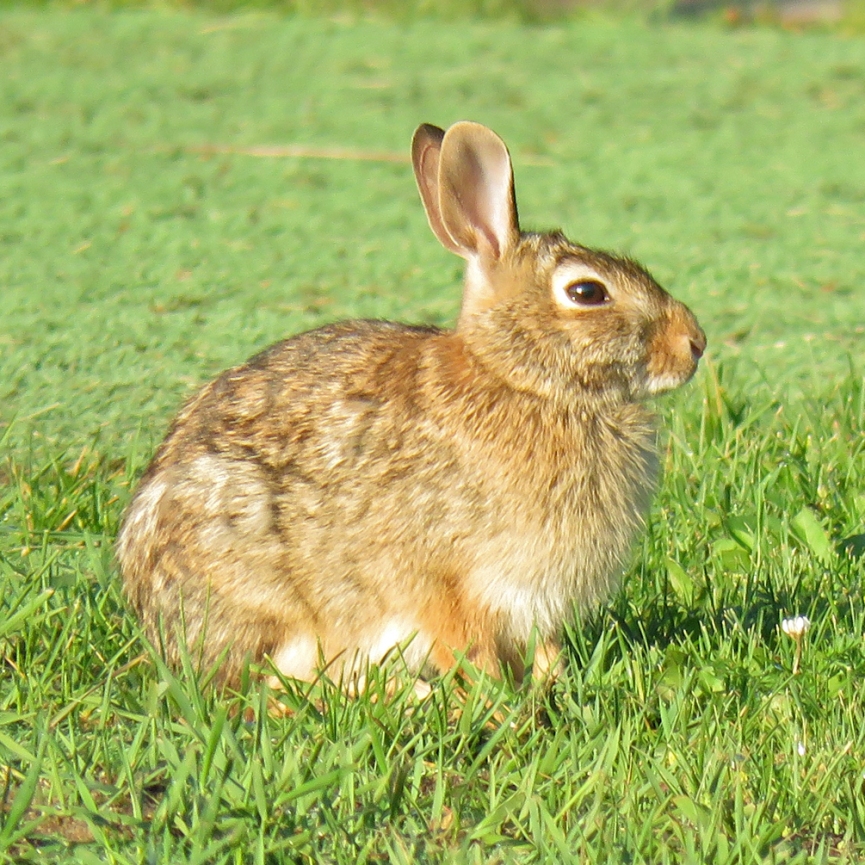 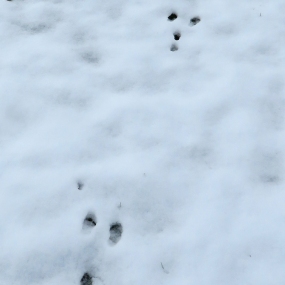 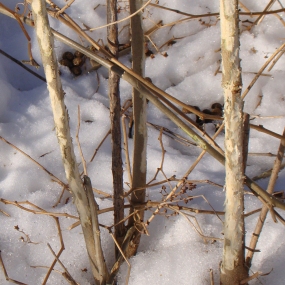 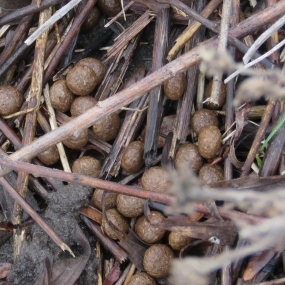 Raccoons are very rarely seen during the day in Douglas Park, and they are even shy around the park’s wildlife camera. In the photo below, you can tell that big ball of fleeing fur is a raccoon because it has dark rings on its bushy tail. 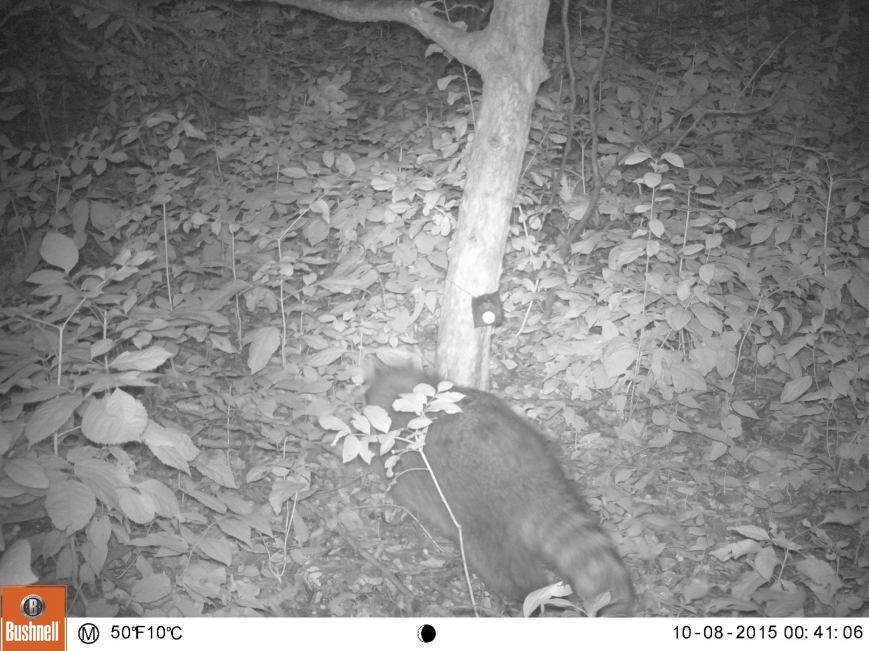 We have also found evidence of coyotes, voles, and other mammals in Douglas Park. We’ll post more mammal photos as they become available.